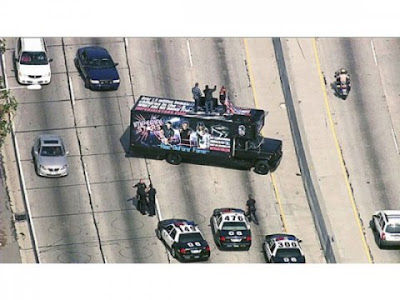 HOLLYWOOD — A self-described hardcore hip-hop group from Orange County caused havoc on the southbound 101 freeway near Sunset Boulevard Tuesday morning when they began performing atop its truck. California Highway Patrol officer Terry Liu said the agency began getting calls about the incident at 10:20 a.m. Three people were arrested on suspicion of unlawful assembly, Liu said. This video image provided by KTLA-TV shows California Highway Patrolmen at the scene of the 101 freeway blocked by a truck advertising the rock band Imperial Stars after they preformed an impromptu concert, Tuesday Oct. 12, 2010 in Los Angeles. According to Liu, witnesses reported the group was performing on top of a truck while blocking three lanes of the freeway. Liu said it appears that the driver of the truck got into another vehicle and took off with the keys. Officers had to request a tow truck to remove the band’s truck. Traffic backup almost reached the I-405, Liu said. The group, called Imperial Stars, is based in Westminster, according to the band’s Facebook page. Their latest song is called “Traffic Jam 101.”

As someone in Marketing I like the thought but hate the execution.  I mean, stopping in the middle of traffic to perform your song does get some notoriety, but pisses off many more people.  LA is already a traffic mess as it it without these guys stopping traffic to promote their song.  These guys should get some sort of punishment for all of the peoples times they wasted.  I'd give this stunt a 1 out of 5, creative idea, bad execution.

My advice, line up in the break down lane while there is actually a traffic jam and perform.  Much more of an audience as people will still be slowly passing by and you wont ruin anyone's day.  In fact, you may make it better with some good tunes.

What do you think?  rate in the comments section below.