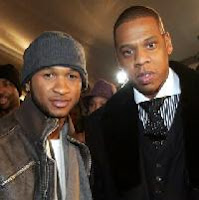 I don't know how to explain what Usher has been doing but I really don't like it. He went from songs like "Confessions" and "Caught Up" to "Yeah" and "Love in This Club", but I really hate the songs he has released lately, especially almost every song off his latest album, Raymond v Raymond. Maybe my expectations were raised after "Love in this Club" was released but seriously Usher, can you get back to using your great vocals and smoothness rather than songs like "OMG" and "Hey Daddy (Daddy's Home)".

Below is a song which leaked today called "Hot Toddy" (I know it sounds like another over played song like "OMG") which features my favorite rapper, Jay-Z and I think is better than the Usher songs currently getting overplayed on the radio. As a bonus track I uploaded "Red Light" an underrated song off his Confessions album as a bonus track.

Update: If the track can't be played off the blog, then just click the song's title.