Last week BTB went to Chicago for the sixth annual Lollapalooza festival. This great concert series brought in over 250,000 fans to Grand Park for three full days and nights of music.  BTB has a quick recap of our favorite shows. 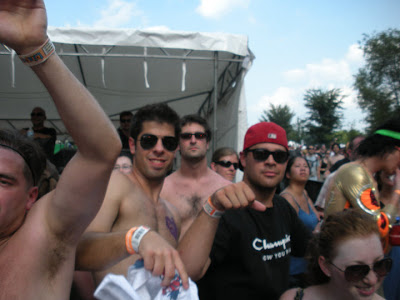 Friday - The main headliner had to be Lady Gaga. While not a fan, BTB was amped to see her show and see what all the excitement was.  Overall, we were very disappointed in her show as she seemed to try and over do it with her crazy "statements" and over the top antics.  We also got our first live look at J.Cole at Perry's which is pretty much just a huge dance party.  Our favorite show of the day was Matt and Kim who not only did a great job with their music, but seemed to be having as much fun as the crowd and really got them excited and amped.  From jumping in the crowd to climbing up the side of the stage their performance was wild.  Of course, they finished off with "Daylight" which was a perfect ending to a great show.  We also loved Chromeo where we got a great spot in the 10th row.  Chromeo put on a great show that was worth getting a bad spot for the Gaga show as crowds of people skipped it to see her.  Though we missed most of their show, The Strokes also did an phenomenal job from what we did see and lived up to their hype of being a great live band.  Unfortunately, the crowd was so small because of Lady Gaga so they did not get the hype they deserved.

[youtube=http://www.youtube.com/watch?v=NnjdDkmd26k?fs=1]
Saturday - Saturday started with a trip to see Blues Traveler which was more of a laid back watch for us as we tried to relax after a long day before. We checked out PerryEtty vs. Chris Cox at the Perry's (named after PerryEtty) Sound Stage which was one of the more wild exciting moments of the concert.  Though a pretty young crowd, the dancing, jumping and fist pumping were a great way to wake up the day crowd.  We also checked out one of the best shows of the weekend, Edward Sharpe and the Magnetic Zeroes which did the best job of putting on a performance.  Saturday's main headliners were Green Day and Phoenix.  We decided to check out Phoenix who did not disappoint.  They played every song from the album and opened with “Lisztomania” into “Lasso."  They closed with "1901" which was a great finish to the day. 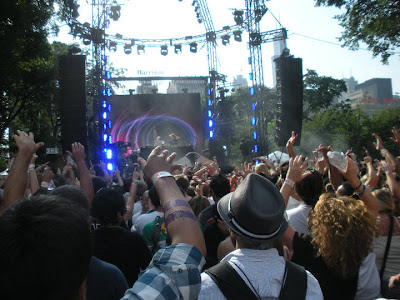 Sunday -  I was most excited to see Chiddy Bang and they didn't disappoint.  While the weather was super hot and the crowd at Perry's was uncomfortably crowded, Chiddy Bang put on an awesome show, with Chiddy showing off his rapping skills by doing a solid freestyle with suggestions from the crowd.  He finished off with "Opposite of Adults" which was a perfect way to leave Perry's for good.  The last act we saw was MGMT which we found very disappointing.  MGMT had a very poor crowd. People were crowd surfing during mellow songs, though many people didnt feel like they were into it and everyone seemed like they were there just to have something to talk about on Monday.  The main act that night were Arcade Fire and Soundgarden and though we wern't able to hear either of them, we heard great reviews from people later.
[youtube=http://www.youtube.com/watch?v=zKRvBicpEHk?fs=1]

Overall, Lollapalooza was an amazing experience. The entire event is special.  From the amazing bands to the people watching, there is not may events quite like it in the world.  I dont think anyone can describe it better than our friends from Up Chicago.