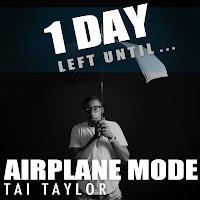 As mentioned earlier, Tai Taylor is a rapper/actor from Los Angeles who has been working very closely with AJMG for a while now. After all the hard work by everyone involved, Tai's debut album, Airplane Mode, is set to be released tomorrow for the whole world to hear. This cat is quite talented and working with AJMG has helped really show it. He is great at mixing up the style of his music. He has songs with the club, energetic feel that is groomed for lots of radio play in addition to a great selection of songs which show his real self and raps about his struggles to get to where he is now and the long road ahead of him.
Check out this short video "Flight Dreams" below which Arthur Johnson himself says is "the album as a visual...We transformed all of the powerful songs into visual moments so that people could really grasp the story." He concludes this statement saying, "We want people to connect to the struglle of chasing dreams, and that's what we see depicted in the video."
[youtube=http://www.youtube.com/watch?v=9PUC-2SdAq8?fs=1]
Tai Taylor has a bright future ahead of him and will soon become popular on college campuses nationwide. Check back here tomorrow to hear the entire Airplane Mode album. In the meantime, listen to "The Layover" featuring Charly East as well as "Dance Tonight"off the album and visit AJMG for more information on him and what he is about.
http://player.soundcloud.com/player.swf?url=http%3A%2F%2Fapi.soundcloud.com%2Ftracks%2F5452279%3Fsecret_token%3Ds-0GLAj&secret_url=false Tai Taylor - The Lay Over (feat. Charly East) by Evanwish1
http://player.soundcloud.com/player.swf?url=http%3A%2F%2Fapi.soundcloud.com%2Ftracks%2F5421676%3Fsecret_token%3Ds-oDhM4&secret_url=false Dance Tonight- Tai Taylor by TheDefynetwork
Download: "The Layover and "Dance Tonight"